8 out of 10 Americans Live Paycheck to Paycheck 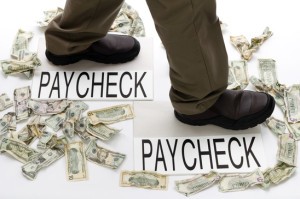 There was a recent article in USA Today (https://www.usatoday.com/story/money/personalfinance/2017/08/24/cant-keep-up-more-americans-living-paycheck-to-paycheck/597162001/) which cited a survey performed by CareerBuilder.com that indicated that almost 80% of Americans are living paycheck to paycheck.

If you think about that for a minute it will blow your mind.  That means that millions of Americans, even those making significant incomes, are just a paycheck way from being unable to pay for housing, vehicles, medical expenses, utilities, and other necessary living expenses.

We all want to pay our debts if we’re able to, but with wages flatlining and living expenses going up all the time, the average American’s disposable income has been squeezed down to nothing.

It would only take an event such as the loss of a job, a divorce, the death of a spouse, a medical emergency, or a significant unexpected expense to make everything fall apart.

It comes as no surprise then that millions of Americans have chosen to seek bankruptcy as the most effective, most affordable, and least time-consuming method for dealing with overwhelming debt.

If you find yourself robbing Peter to pay Paul or having to decide which bills are not going to get paid each month, do yourself a favor and give us a call.  You owe it to yourself and your family to at least find out what your options are.  It takes a lot of courage to step forward and seek help, but millions of Americans have taken that step and received the relief they needed.

Don’t spend any more of your hard-earned Jeffersons, Lincolns, or Franklins for that matter, until you give us a call to find out what bankruptcy can do for you.