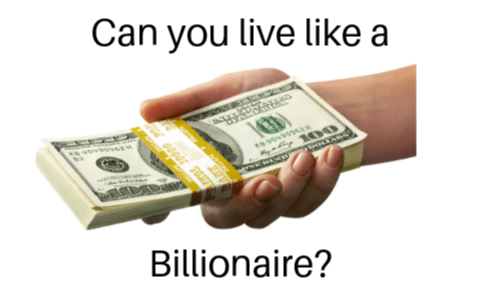 Dave Ramsey, a financial guru, says there are two kinds of people who buy brand new cars.  Millionaires and people who are not financially wise with their money.  However, one-third of millionaires never buy new cars.  For some of them, one reason they are a millionaire is less on how much they make but in how wise they are in spending money.  They know it is better to buy a 2 or 3 year old car off some sucker who bought it new for about half the price.

Three billionaires in America own more wealth today than the bottom 50% of America.  Bill Gates, Jeff Bezos and Warren Buffett own more stuff and money between the three of them than the over 150 million people who own the least stuff.  So, how does Warren Buffet live?

He lives in the same house he bought in 1958, which he paid $31,500 or the equivalent of about $270,000 today.  He buys reduced price cars, like those with some hail damage that maybe he can then fix to not look so bad.  He only buys a replacement when his daughter says his is getting embarrassing.  His favorite hobby is bridge.  The gifts he gives to friends are picking up Bill Gates personally at the airport, instead of sending a limo.  Bill Gates explains that when he offers to buy lunch, he means a fast food place where Warren fishes out and uses coupons.  In 2013, he was still using a flip phone.  He has had the same wallet for 20 years.  (Ok, I tend to lose my wallets long before then, and my dogs do seem to find them tasty.)

He has worked in his business in the same office building since the 1960s.  He converted a dresser drawer into space for his first child to sleep in while borrowing a crib for his second.  (Do not borrow cribs.  Advancements in safety mean that old cribs may in fact be more dangerous than new ones.  Maybe you never died from not wearing a seat belt as a kid, but really here maybe spring for a newer crib).  All the same, maybe the point here is finding a way to make do with what you have than needing to do what everyone else is doing.  The most important thing to him seems not to be money but family.  He can tell you everything about his various grand-children and their lives.  “You can’t buy health and you can’t buy love”, Warren Buffet.

He is not leaving his estate to his children, making it clear to them early on he would provide substantial assistance to them one time to help start up a business or something, but they would not become billionaires upon his death.  Then again, he is setting up foundations for the money while letting his children decide their focus.  He strongly believes we should not give our children everything they want, as they need to know what it is like to not get exactly that.