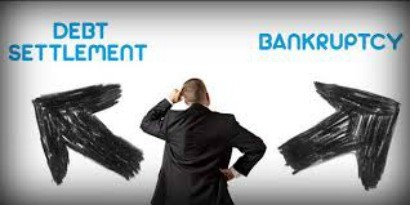 Debt settlement is a negotiation process whereby a consumer seeks to settle debts away for an amount less than what is owed.  This process generally involves the offer of a lump-sum amount to the creditor to settle away the debt.  The consumer can either negotiate directly with the creditor or using a debt settlement company.

If a debt settlement company is used, it will generally require the consumer to make monthly payments until the company’s fee has first been paid and then continue making monthly payments until the targeted lump-sum amount for settlement has been accumulated.  The debt settlement company then makes the offer to the creditor.  If the offer is accepted, the debt is settled. If the offer is refused, more negotiation takes place until either a settlement is reached or the creditor simply refuses to negotiate.  If the debt is settled and if the amount that was forgiven is more than $600 total, the consumer will receive a 1099-C form at the end of the year for “Cancellation of Debt,” which tax authorities will consider to be “ordinary income” for tax purposes. The entire process outlined above would then be repeated for each debt the consumer has.  If a consumer has several debts (e.g., credit cards) it could take months or years and thousands of dollars to settle away everything.

If you file for chapter 7 bankruptcy, the discharge of the debt usually comes within 3-4 months after your petition is filed.  Also, you won’t receive a 1099-C form at the end of the year because debts discharged in bankruptcy are not considered “ordinary income.”  If your credit score is already damaged, filing for bankruptcy will often improve your score much more quickly than with debt settlement or debt consolidation.

If you’re not eligible for chapter 7 bankruptcy you could try a chapter 13, which is a repayment plan.  In chapter 13 bankruptcy, unsecured credits (e.g., medical bills, credit cards, etc.) often end up not receiving much and get discharged at the end of the plan, which runs between three and five years.