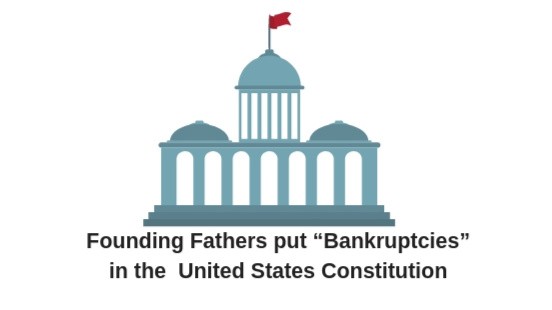 Article I, Section 8, Clause 4 of the United States Constitution says:

The Congress shall have Power “to . . . establish . . . uniform Laws on the subject of Bankruptcies throughout the United States.”  So, the Founding Fathers found the need for bankruptcy laws to be uniform so important that they addressed it in the Constitution.  This ensured that someone who had filed bankruptcy in one state to discharge their debts could not be put in prison in another state for not paying their debt.  However, Congress did not always see fit to enact federal bankruptcy laws.  The first bankruptcy law was passed in 1800 only to last until 1803.  The next law was passed in 1841, ending in 1843.

After the civil war, bankruptcy laws existed from 1867 to 1878.  In 1898, Congress enacted a bankruptcy law that remained in place until major changes in 1978, and less major changes every few years since then, with 2005 being the last time the bankruptcy laws were dramatically changed.  While there is an urban myth that Abraham Lincoln filed bankruptcy, the only reason he did not is there were no bankruptcy laws in place at the time.  He started up a hardware store that did not do well and in his words,  “sort of winked out”.  After that, he once tried to return to his carriage only to learn it had been seized by one of his creditors.

Walt Disney had better luck when his Kansas City based business failed as there were bankruptcy laws in place allowing him to file bankruptcy.  He got a fresh economic start in bankruptcy and managed to do okay for himself afterwards creating a business named after himself that perhaps you may have heard of.  Despite the federal uniformity of bankruptcy laws, the federal laws allow the states to come up with their own list of exempt property or what Debtors may keep.  As result, Debtors in Kansas get to keep all the equity in their home, even hundreds of thousands of dollars, while Debtors in Missouri can protect $15,000, which is better than the $7,500 limit it used to be.

One Kansas bankruptcy judge recently said he believes the reason Kansas exemptions or list of property the Debtor gets to keep in Kansas is generally so much better than in Missouri is because Kansas was settled by homesteaders who got their 40 acres and then built up their homestead where many things were important to them.  Missouri on the other hand was created by more trappers and hunters who figured if they could not carry something with or on their mule, it was not really that essential.  Thus, maybe bankruptcy laws are not all that uniform today, but that is because of the choices made by the Federal Congress.  Frankly, the way the same words of the federal statutes in bankruptcy law are often interpreted differently in different states as well, until any differences are settled by the US Supreme Court.

While bankruptcy is an important and essential part of our American system of capitalism today, there is no constitutional right to file a bankruptcy.  However, there is and has been a statutory right to file bankruptcy since 1898 that allows folks who are down on their luck to wipe the slate clean and get a fresh economic start.